Deborah suffered with fistula for 2 years after being married at the age of 20.

The birth was done naturally but the doctors had to cut another passage for the child to be delivered normally, this was done and incredibly the child survived. After the birth Deborah was referred to another hospital, where it was discovered that she was continually leaking feces.

Unfortunately, she was not given any help for the condition and was left to suffer with fistula until she heard on the radio about the Fistula Care Centre.

During her time suffering with fistula, Deborah was isolated by those around her. Her relationships with her relatives and friends was not good. This led to her feel lonely and upset.

Deborah came to the centre in 2016 where she received treatment in mid February. Throughout her time at the centre, Deborah found it difficult to attend classes because her fistula problem was quite severe. She benefitted a lot from the arts & crafts classes and she worked very hard to make a lot of things for the arts & crafts stall. As a thank you for her hard work, Deborah received the gift of a necklace on leaving the centre.

Now her life has changed for the better. Her relationships with family and friends which were fraught are now better than ever and her husband stuck by her throughout her time suffering with fistula. Their relationship has always been good but he is very happy that she is now dry and healing.

Deborah has managed to sensitise those that come to see her in her home, so far none of them have had fistula but once she has fully recovered she plans to spread awareness and will strive to work hard and do well in sharing her message to help others.

In the future, Deborah would like to build her own house if her food business is successful and she makes enough money. In order to start her food business, Deborah has used the Bboxx she received when leaving the centre to charge phones and make some money. Her family also use it as a lamp at night and this has saved them money on buying candles and paraffin. So far, Deborah has made MK 6500 and has saved MK 5000 of this money to invest in her food business.

We wish Deborah great success with her dreams and are so glad she is now fistula free.

Deborah is 23, married and lives in Lumbe Village in the Lilongwe District of Malawi 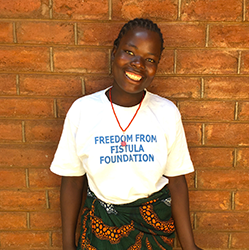