Alinafe was married at the age of 18. Now 33, Alinafe lived with fistula for 2 years following the birth of her first baby.

Alinafe went into labour and was quickly rushed to the nearby health centre where she stayed in labour for 3 days.  The doctors tried to operate but they were not able to deliver her baby so referred her to the district hospital. Sadly it was too late. Alinafe lost the baby.

After waking up from her operation Alinafe noticed she was leaking urine and the doctors confirmed that she had an obstetric fistula.  Alinafe was referred to our Fistula Care Centre in Bwaila in 2018.

Alinafes case was complex and since 2018 Alinafe has undergone three operations to fix her fistula.  Her third and final operation was a success, and she is now completely dry.

In the 2 years Alinafe had fistula she understandably became depressed. She spent most of her time alone as the people in her village did not want to be her near her due to smelling of urine.

After leaving our Centre cured, and dry, Alinafe told us she felt so alive and happy.  She could not believe that she was fistula free as she had to undergo three operations for her to be dry. During her stays with us Alinafe also attended the educational classes at the centre.  She gained knowledge in how to manage a successful business and learned how to sew and knit.

In 2018 Alinafe received a solar business unit as part of our income generation initiative, and she uses it to charge phones. Her micro enterprise has enabled her to purchase fertilizer for her farm and pay for school fees, purchase clothes and books for her child. Alinafe hopes to one day build a house that is safe for her family to live in, especially during the rainy season, and she also wants to buy livestock such as goats, chicken and a cow.

“A big thank you to the FCC team, you have transformed my life and you have cured me.  Thank you.” 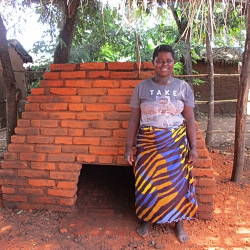